The ocean is a tough environment and life for our underwater bros is a constant Survivor challenge: outwit, outplay and outlast the predators. 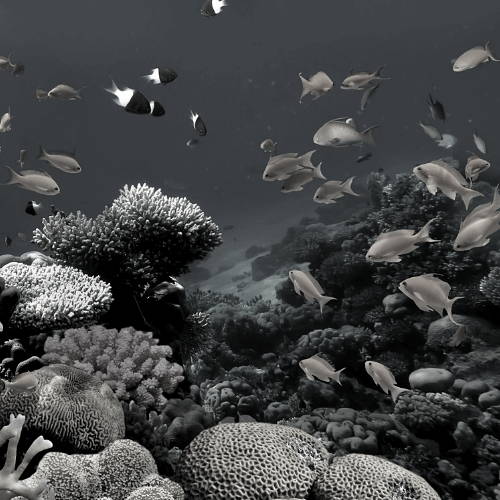 That’s why parenting behavior is not exactly widespread among the denizens of the deep. In fact, only around 20 percent of fish species worldwide display some form of parental behavior. There’s not much instinct for nurture, especially when your day is full from just feeding and trying to stay a step ahead from those who would like to feed on you. Once you lay your eggs, abandon them promptly.

And yet there are still pockets of nurturing communities in the vast reaches of the ocean.

Last May, we highlighted the maternal qualities of some wonderful creatures swimming in our oceans. On Father’s Day this month, we’ll going to highlight paternal displays of nurture among these bros.

There are three types of paternal roles that have been observed among male fishes. These are: 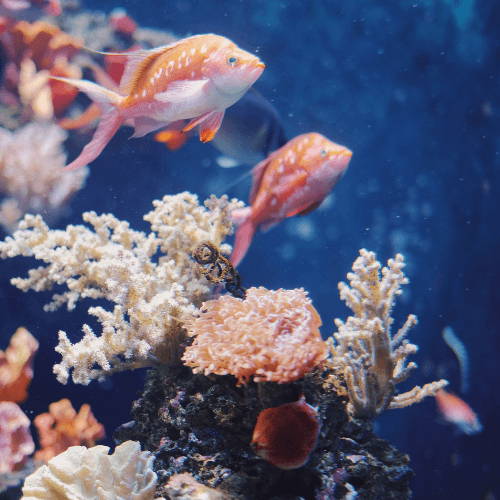 If you’ve got a father who likes to DIY things so that you can have a secure roof over your head, or whip up excellent, home-cooked meals so that you’ll always be fed, then he’ll fit right in with these critters.

Because these male fishes are the guys who make sure that their eggs come first, no matter the cost. They’ve got great nest building skills and are fiercely protective of their young.

Found on both sides of the Atlantic, the cute lumpfish is also known as a lumpsucker because its bottom fins are like suction cups that actually stick to surfaces. They have a reputation for being a cleaner fish species because they feed on parasites living in fishes. This has made them indispensable in sustainable salmon farms where they function as pest managers.

During mating season, the male lumpfish attracts the attention of the female by building nests. Whoever builds the greatest nest wins the female. 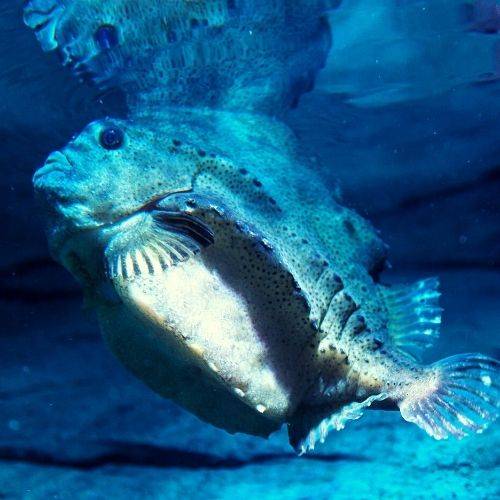 She will then lay her clutch of about 350,000 eggs, and then swim off, dumping the guy. The male lumpfish will then fertilize the eggs and then suctions himself near the nest to protect the eggs and ensure that it gets enough oxygen by fanning water into the nest. Only when the eggs hatch (in about a month, or two), will the male lumpfish abandon the nest, having fulfilled his paternal duties.

Sand gobies are often found in estuaries or muddy and sandy coasts. Also known as a polewig or a pollybait, it often lies motionless on the sand bottom, waiting for its prey to pass by.

During breeding season, however, male sand gobies come out to look for empty mussels and other shells to build their nests. They hollow out a space underneath the shells and pile sand on top to camouflage them. This nest building behavior often becomes frenzied in the presence of females, leading researchers to document this behavior as “courtship parental care.”

Later, after the female has laid its eggs, the father remains nearby, not only to fertilize the eggs but also to stand guard over the nest, using their pectoral fins to fan fresh, oxygenated water over the clutch so that they can hatch.

Found only in the Northern Hemisphere, the three-spined stickleback is the subject of various researches into its behavior, physiology, and marine ethology. In fact, it was the subject of a landmark study on fish behavior which highlighted its nurturing behavior.

Sticklebacks are nest architects. Whereas other species will be content with digging a hole, a stickleback will scrounge for sand, algae and other marine debris to build his nest. He constructs this with a glue-like secretion from his kidneys. Once the nest is finished, he courts a female. After the female lays her eggs in the nest, he will chase her away so that he can fertilize and guard them until they hatch.

This hermaphroditic fish is best known for living in a symbiotic relationship with a toxic anemone. Clownfishes are immune to the anemone’s nematocysts because they are protected by a layer of mucus that slowly builds around their bodies.

While very territorial, they are also very nurturing. In fact, a bachelor clownfish will even care for a clutch of eggs from a different nest. After fertilizing the eggs, the clownfish will always ensure that a current of oxygenated seawater keeps the eggs nourished. They’re also very meticulous; the father will eat any eggs that are infertile or damaged by fungus, thus ensuring that the whole nest is healthy and secure.

As any human father knows, keeping track of the kids on a daily basis can be exhausting. Now multiply that with a progeny by the hundreds. It’s enough to stress out a father from parenting.

For this creatures, however, it’s a matter of keeping them in the right place. And because of this, nature has given them big mouths to use, not only for eating, but also for nurturing young ‘uns.

5. Cardinalfish (Pterapogon kauderni)
Found only in the Banggai archipelago, Indonesia, this tropical fish is popular among aquarium hobbyists. The large demand for them has led to a decline in the wildlife population, hence endangering this species. 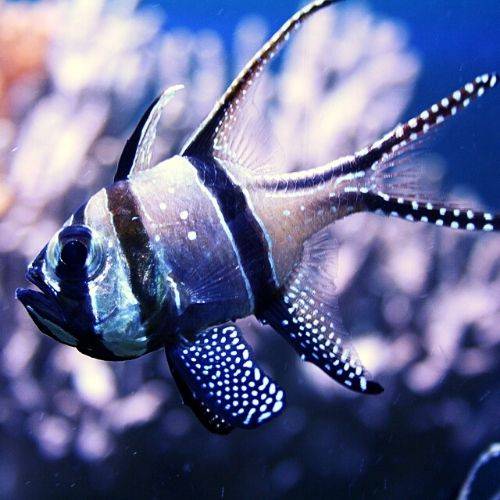 During breeding season, the female will release a mass of eggs near the male’s vicinity. After fertilising it, the male will immediately take it into its mouth for incubation. Because the eggs are relatively big, the male mouth’s will become distended to accommodate the eggs. For a month, the male fish will not eat and attends to the eggs by regularly turning them inside his mouth and expelling any that have died. It’s probably because of the male’s vulnerability during this period that female cardinalfish have been documented to aggressively protect them while mouth breeding.

Found in warm, marine waters all over the world, jawfishes live in the outskirts of reefs where the seafloor is generally flat. They make homes in tiny caves that they build using their mouths to excavate the sand. From the safety of their caves, they will wait for prey, their heads occasionally poking up the sand.

But their jaws aren’t only good for digging. Come breeding time, female jawfishes will lay eggs and the males will fertilize them and incubate them in their mouths. Like other mouth breeders, they will sit still and wait until the eggs hatch in about a week or so, whereby the younglings will spew out from the mouth to swim about and later mature into adult jawfishes looking to build new caves again.

Distinguished by the hard, bony plate on top of their heads, the hardheaded catfish lives in near-shore waters and estuaries in North America. It has a large dorsal barbed spine that is mildly toxic. It is a voracious eater and will eat any natural bait.

This does not extend to its young, however. The mouths of male sea catfishes can hold eggs the size of marbles. It takes 60 days for these eggs to hatch, during which time the male doesn’t feed. When the eggs hatch, juveniles will remain or return to the father’s mouth for protection. This means another two weeks when the father will stave off from feeding.

Underwater, pregnancy is not the sole domain of the mother. In this particular group of fishes, the females have turned over the role of the pregnant mother to the males.

Pipefish live in seagrass beds, camouflaging themselves in the underwater foliage, by aligning themselves vertically and swaying along with the current. Some species are known to change color with their habitat.

Pipefish have an elaborate courtship ritual. When it is over, the female deposits a clutch of eggs in the male’s brood pouch where they incubate before they are hatched. 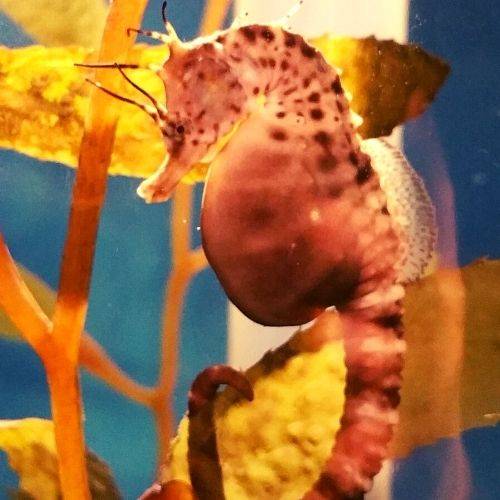 Found only in Australian waters, the leafy sea dragon is very good at camouflaging itself that predators and prey can’t recognize them. They look like floating pieces of seaweed because of the leaf-like appendages they have on their body. But unlike their pipefish relatives, they don’t have a brood pouch for their eggs.

Instead, the female lays the eggs on the underside of the male’s tail. This brood patch only appears on the male during the breeding season. He carries the eggs for two months until they hatch. Upon leaving the protection of dad’s leafy tail, the baby sea dragons are sustained by their yolk sacs until it runs out in two days. By then they start feeding on plankton.

Perhaps the most familiar of all male egg-bearing species, seahorse male pregnancy is also the most complex. The genes of the male seahorse help him in a variety of ways to ensure the health of its progeny. Essentially the genes allow the male seahorse to provide the same functions that occur in females during mammalian pregnancy and birth.

Seahorses perform a courtship dance that can last eight hours during mating season. After the ritual, the female deposits the eggs in the male’s stomach pouch, where it is fertilized by the father. The male seahorse can be left carrying some 2,000 eggs in one pregnancy.

There are some 1,000 species of sea spiders all over our oceans. They are omnivorous, with their diet ranging from algae, meat or scavenging material. They have a proboscis that is armed with teeth that they use to puncture prey so that they can suck up the juices.

Their legs play an important role in their reproductive cycle. The female keeps her eggs in her femur, releasing them only when the male stimulates her using his special legs-the ovigers. Upon fertilization, the male will gather the eggs and stick them to his ovigers where they will remain until they are hatched. No scientist has ever studied how long this will take.

Fish they may be but they are still awesome at parenting. And they’re not the only ones. With all the vast species still to be discovered underwater, there could be more than just these ten awesome daddy fishes. That’s why it’s important to save our oceans so that creatures like these can go on nurturing more generations.

If you want to do something significant to mark Father’s Day, how about supportingopcean conservation initiatives? Here at Wave Tribe, we’ve put together a Heal Our Oceans campaign that lists all the wonderful organizations and projects that are making a difference in protecting and keeping our oceans healthy. Whether you donate in your father’s name or sign up for both of you to volunteer in a conservation project, your efforts will go a long way towards keeping our oceans sustainable for humans and marine wildlife alike.

Essential Wave Tribe Reads for you

Dolphins in the Navy and Our Other Bros 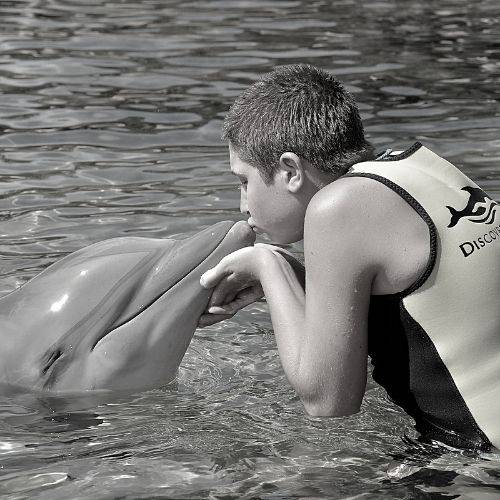