Check our our podcast.

Some Facts About Sea Snakes: What to Do When You See One While Surfing

Want to be on our rad surf and life podcast?

Some Facts About Sea Snakes: What to Do When You See One While Surfing

If you’ve surfed all your life in the cold waters of the Atlantic, then you’re fortunate enough never to have encountered a sea snake. 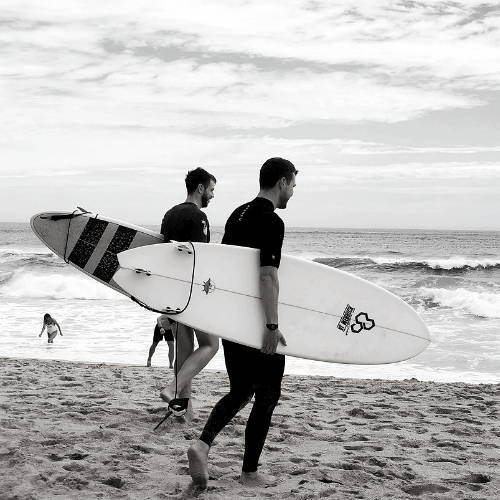 But if you’re planning your first surfing trip somewhere where the waters are warmer, you just might have the opportunity to see this species but hopefully, not up close.

That’s because they thrive in tropical waters, like the Indian Ocean, or in seas in Southeast Asia and Australia. Like their land based cousins, sea snakes cannot tolerate cold temperatures.

Snakes are often mischaracterized as dangerous creatures. But out of the 4,000 species worldwide, only a fourth actually possess the toxic venom that can kill animals and humans.

That reputation, unfortunately, also extends to their cousins who live in the sea. But the truth of the matter is that, an encounter with a sea snake isn’t necessarily terrifying or dangerous. As long as you know how to treat them, it will be, at the very least, an awkward encounter between two species partaking the benefits of the ocean experience.

In this week’s post, we’re featuring sea snakes because on the 16th of July, the world celebrates World Snake Day. It’s not a popular celebration; in fact, only wildlife conservationists and snake collectors seem to know about it. Well, that and some snake loving areas in India.

But while it isn’t a recognized holiday, it’s still important particularly for snake conservation efforts. World Snake Day can be used as a tool to educate and inform people about how to deal with snakes, whom to call, and what resources are available to them to use.

Sea snakes, especially, don’t get highlighted often which makes them even more misrepresented in the areas of public opinion. So to celebrate this day, here’s what you should know about them.

Let’s get this out of the way first. Yes, they’re very venomous; some even more than their terrestrial cousins, like the King Cobra. The Beaked Sea Snake, for instance, has a venom so toxic that 3 drops of it can kill eight persons outright.

Scientists believe this is because of an evolutionary adaptation that allows them to hunt prey easily in a marine environment. Unlike land snakes which have the luxury of waiting for their prey to die from their venom, marine snakes need to have a quick acting venom so that their prey won’t escape to deeper depths where the snakes can’t follow or get snatched up by another sea predator instead.

Other researchers also say that this is because sea snakes evolved from a highly venomous land ancestor in Australia. As it so happens, the world’s five most venomous snakes live on the Australian continent, and if this hypothesis is true, then it’s no wonder why sea snakes are very venomous. 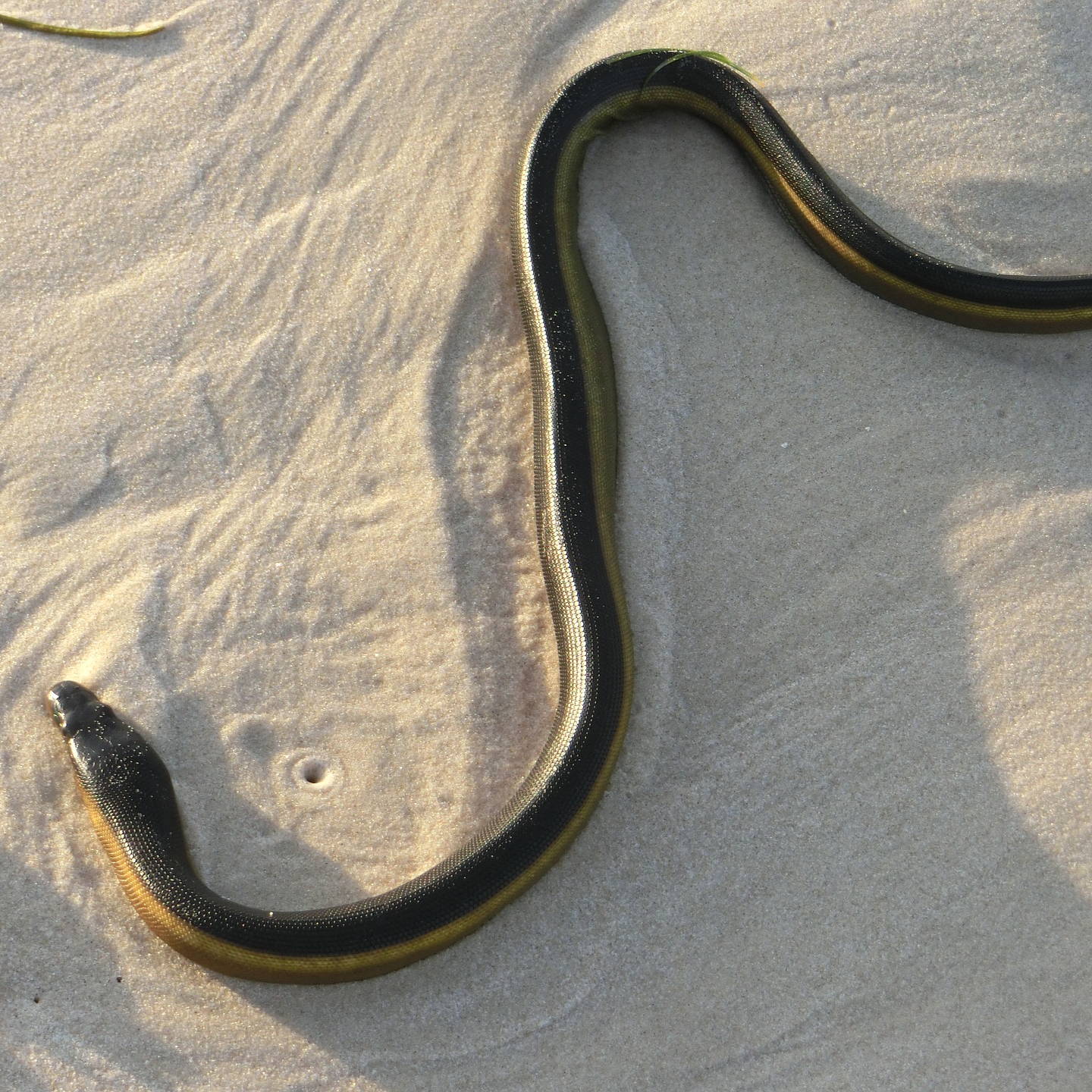 And yet, despite their deadly venom, it’s a rare chance when one gets killed from a sea snake bite.

That’s because they’re retiring creatures. They are very shy and would rather swim away from humans and other creatures. Unlike the cobra, which can be aggressive when threatened, a sea snake would rather find ways to slip away into quieter waters.

And even if they were to bite, they rarely deliver the venom. Their fangs are shaped differently than their land cousins; it’s shorter and easily breaks off. It wouldn’t penetrate a neoprene suit.

In general, sea snakes bites are rare; only 3% have been recorded to be fatal. In the one case that was covered prominently in the media, it was attributed to the fact that the snake was stressed and felt threatened after being caught in the trawler net.

Sea Snakes Can Die of Thirst in the Ocean

Sea snakes can’t go on land to drink freshwater. That’s why they rely on rainwater that falls on the surface of the ocean. That doesn’t mean they don’t swallow sea water occasionally. They can however tolerate it because they have evolved glands under their tongue that allows them to expel away the salt from their prey or from their drinking water.

It actually lives in the open tropical ocean. It just so happens that the climate change brought about by El Niño has resulted in warmer waters in the Pacific Ocean. This rising sea surface temperatures, accompanied by shifting ocean currents, have enabled this yellow-bellied sea snake to find its way to our part of the world.

A Sea Krait is not a True Sea Snake

The ocean is host to two kinds of snakes: the sea kraits, and the true sea snakes.

Both live in tropical waters but the feature that distinguishes them is the difference in the way their bodies are formed.

True sea snakes have flattened, ribbon-like bodies, with oarlike tails. This makes them efficient swimmers but lousy land crawlers. Sea kraits, on the other hand, have cylindrical bodies like a terrestrial snake, but still have flat tails.

Sea kraits lay eggs on land before going back to the ocean. Sea snakes, with the exception of one species, lay eggs or give birth to live young underwater. 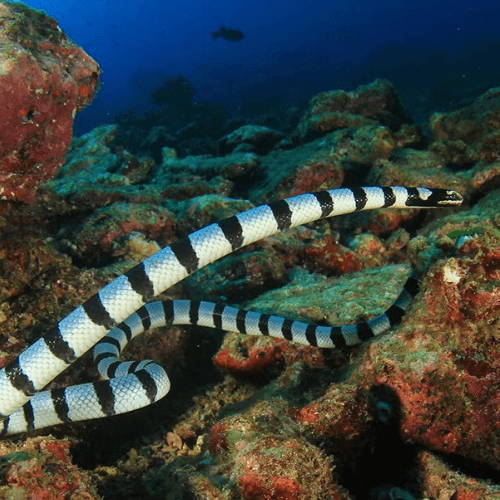 They’re not on any traditional culinary menu but they can be eaten if you happen to be shipwrecked on an empty island or cast off in the middle of the calm ocean. Or so this website says. Just be careful about the fangs and the toxin though. Snakes have a bite reflex. Even if they’re dead, their jaws can still snap and inject venom into the bite.

So What to Do When You See One while Surfing

Sea snakes and kraits are gentle and beautiful creatures. If you happen to see one swimming or crawling on the shore, leave them be. Appreciate the variety of colors on their bodies but learn to respect their space.

They have no desire to bite you as long as you don’ t do anything to harm them. Fishermen in trawlers have been gathering them off their trawlers and throwing them back to the sea for a long time with rarely a fatal incident.

So as you ride on that surfboard on warmer, tropical waters, keep a friendly look-out for this undeservedly maligned sea creatures. They’re harmless, really, as long as you don’t disturb them.
Like you, they deserve to swim along their own spaces in the vast, wide waters of the ocean.

And also, if you’re on the look-out for some eco-friendly surfing gear, check us out.

Changes in the Ocean? Look at its Indicator Species
What El Nino means for Surfers and our Planet
The Great Barrrier Reef is Dying and Why We Should be Alarmed 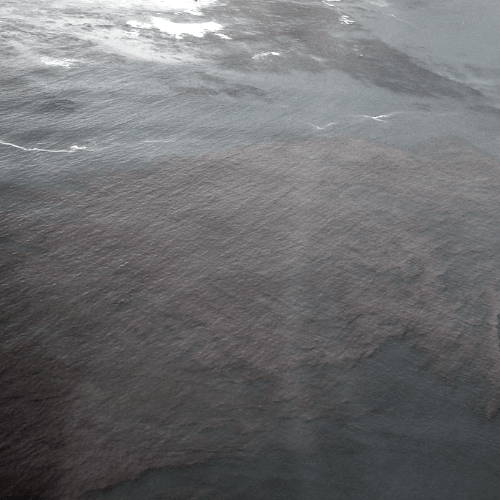 Americans are actually the biggest cosmetic consumers in the world with an estimated total revenue of 62.46 billion dollars. This is all well and good for the economy until one realizes that the cosmetic industry can also endanger the environment. And that’s because of one major substance inside these cosmetics - microbeads.
Read more

How to Make Your Surfers Diet Sustainable for the Ocean

In order for surfers to be fit, one needs not only regular training but also a proper diet in order to ensure that the body is healthy enough to respond to the demands of the sport. In this week's article, we give information about the pescatarian diet and sustainable fishing.
Read more