Bluefin tuna's popularity on the plate has nearly brought it to the brink of extinction. 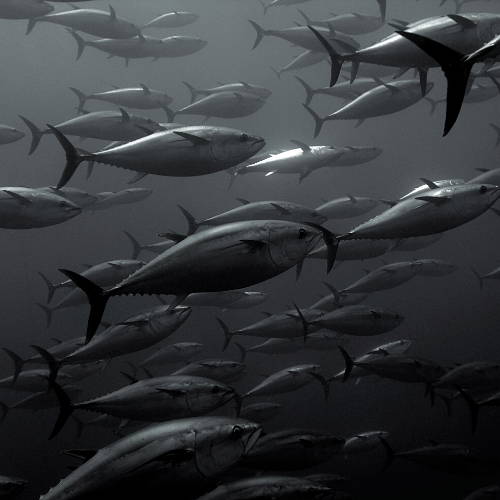 Tuna, if they continue to be overfished, will be extinct in no time.

World Tuna Day is supposed to make us understand that they are more than just seafood.

There’s nothing to deny how delicious it tastes for those who love sushi with raw fish on top. You love how the raw fish glistens. Take a buttery piece, and put it in your mouth. Or pick it up and see how it’s softer than when cooked and dip it in flavorful soy, raise it to your nose and smell the sweet fish and sharp wasabi. You know you’re a fan of such food when it melts in your mouth, and you can’t resist eating more and more after the first chew.

While we love visiting famous Japanese restaurants in our travels to eat them, we don’t know that there are types of fish that play a vital role in the ecosystem that are going extinct because we keep serving them in portions and a posh way that we can hardly resist.

Tuna overfishing and depleting tuna populations have become a major marine problem—specifically, the slow disappearance of bluefin tuna, which humans love serving on plates. Bluefin tuna extinction would produce an imbalance of food webs, and all other species involved would be affected.

This World Tuna Day, the bluefin tuna extinction is something we should be discussing, hoping that the government and the ones responsible finally listen to the experts and directly address the issues that cause their slow disappearance. One reason that makes bluefin tunas vulnerable to overexploitation is that they achieve maturity in advanced age.

Bluefin tuna conservation is less likely to happen when there is a lack of regulations in some areas and when fishers turn a blind eye to restrictions and the lack of fines when breaking the laws.

Here's what you need to know about Tuna Overfishing:

In appearance, the bluefin has a metallic gray, blue, and silver body with fins that are retractable and pairs of eyes set flush against the body. The average size of bluefin tuna is between 1000 to 2000 pounds. The giant bluefin set a world record of 1500 pounds.

Bluefin tuna come into coastal regions every year to breed. Female bluefins between eight to twelve years old are sexually active and can produce up to ten million eggs in one season. However, most of these eggs cannot survive and reproduce themselves, which is another reason we are sensitive to tuna overfishing. Moreover, the bigger the bluefin females are, the more eggs they can produce. 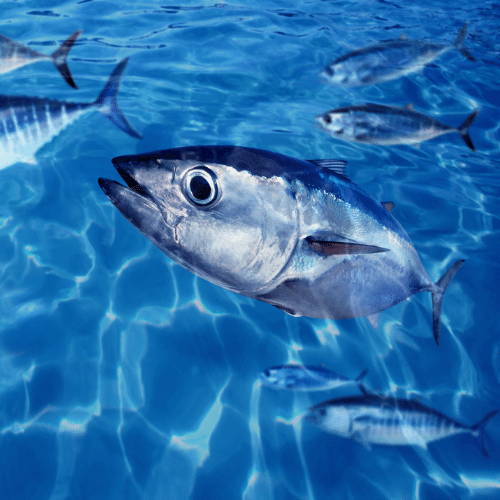 Bluefin tuna is currently listed as 'endangered' on the IUCN Red List.

As predators, they repress populations of their prey which experts have proved to be a vital factor in keeping up a healthy ecosystem balance. However, as has become an all too familiar story, bluefin tuna is listed as ‘endangered’ on the IUCN Red List.

Concisely, the endangered status means that the fish “faces a high risk of extinction in the near future." They also rated other animals simultaneously, such as the whale shark, the blue whale, and the Asiatic tiger and elephant.

One of marine nature’s most successful inhabitants is the bluefin tuna. It is a giant tuna and an animal at the top of the food chain with few natural predators. But the emergence of industrial fishing methods and a savor for the tuna among wealthy sushi lovers have led to tuna overfishing and bluefin tuna extinction.

World catches of tuna have doubled in the last decade. Skipjack tuna, currently not at risk, is the most commonly used canned tuna, although they also use yellowfin and albacore tuna. At particular risk is the bluefin tuna, depleting tuna populations.

In 2015, the International Seafood Sustainability Foundation published a tuna stock status update. It states that bluefin tuna overfishing is rampant and that the biomass is at low levels. 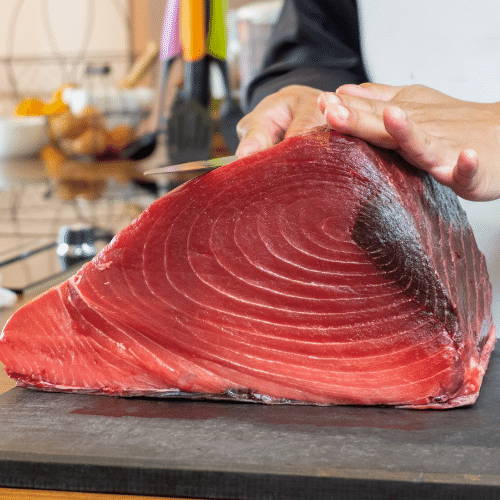 Considered as one of the most delicious foods globally and the emergence of industrial fishing methods have led to tuna overfishing and bluefin tuna extinction.

People like the taste of bluefin tuna. Otherwise, tuna extinction would not have to exist. Bluefin tuna is considered one of the most delicious foods globally. Despite numerous campaigns worldwide to save the bluefin tuna and boycott the production, consumption, and serving in restaurants of the fish, seafood devotees just can’t say no.

The tuna subspecies Pacific bluefin was moved from Least Concern to Vulnerable on the IUCN's Red List of endangered species in November 2014. It indicates a worrying sign for our planet’s tuna populations.

Bluefin tuna is present in many bodies of water, including the Gulf of Mexico, the Atlantic Ocean, and the Mediterranean. Bluefin tuna is among the largest tuna species and is famous as a menu item in sushi restaurants. The greed in making rampant tuna overfishing has pushed to the brink of bluefin tuna extinction for decades.

Unfortunately, since the late 1950’s due to tuna overfishing, the bluefin tuna stocks have dropped by more than 75 percent. Industrial longline fishing is predominantly the mode of catching them. The hunt for bluefin tuna kills thousands of birds, sea turtles, and other oceanic animals as accidental by-catch.

In danger of tuna extinction, the high amounts of neurotoxic mercury present in the bluefin tuna are potentially hazardous to humans. Bluefin tuna contains mercury levels nearly triple that of the more common yellowfin and skipjack tuna.

In public health, mercury contamination of seafood is a widespread problem, especially for pregnant women and children. Ingestion of mercury may lead to vision loss, learning disorders, heart disease, resulting in death.

We are yet to determine which of human’s crimes against the oceans and marine can get undone, but certainly, tuna overfishing is one. If you can’t do it for the love of our planet, do it because your children, grandchildren, and future generation deserve to experience the delights of sustainably fished tuna in their lifetime

Amanda Nickson of the Pew Environment Group said: "There is no logical way a fishery can have such a high level of fishing on juveniles and continue."

Nickson reiterates that it is crucial to make urgent measures to preserve bluefin stocks and allow them to recover. "The population of Pacific bluefin is a small fraction of what it used to be and is in danger of all but disappearing," she said. "It's a precious natural commodity, and people naturally want to fish something that gives them such a high return."

She called for tuna overfishing to halt as a matter of urgency. The main fishing fleets exploiting the stocks are from Japan, Mexico, South Korea, and the US, and the high value of the few remaining fish is further encouragement to fishers to hunt down the last of the species. Think of the beach as a bridge between the land and marine environment. It’s a critical biodiversity area. Cleaning our beaches is a step towards cleaning our oceans.

As consumers, we have the most significant role in changing the situation that these animals face today, such as the bluefin tuna extinction.

We can all make conscious decisions about the food or fish we choose to eat. The Monterey Bay Aquarium’s Seafood Watch app color codes fish by sustainability (green for the best, yellow for a suitable alternative, and red for “avoid”).

Many people equate eating fish with doing something good for their health, but fishes can be the subject of health risk advisories, including the Bluefin tuna. The majority of which are caused by contamination of their ocean habitat with mercury. It is difficult to eliminate from the body once ingested and can cause neurologic disturbances.

We can always choose to have a plant-based diet to spare ourselves from this risk since fruit and vegetables are the safest food that we can consume. We can benefit from a lower risk of heart disease and diabetes and death from any cause.

We can also support establishments like Sushi Nakazawa and sustainable restaurants like Miya Sushi in New Haven, Connecticut, making sushi using invasive fish species. In this way, we are indirectly doing bluefin tuna conservation. Lastly, when making sushi and sashimi at home, we can look to less desirable fish for our fill. 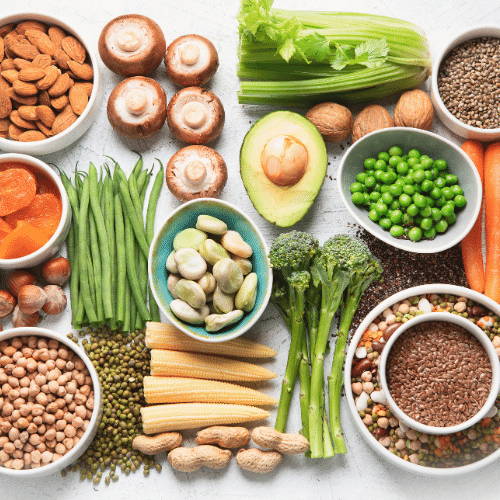 Plant-based diet not only benefits our health, but also is a good thing for the environment.

We are yet to determine which of human’s crimes against the oceans and marine can get undone, but certainly, tuna overfishing is one. If you can’t do it for the love of our planet, do it because your children, grandchildren, and future generation deserve to experience the delights of sustainably fished tuna in their lifetime.

Here at Wave Tribe, we manage possibilities that can help save marine animals, including the bluefin tuna. Our Heal the Oceans campaign speaks volumes about how it is essential to preserve and protect the homes of marine animals by avoiding the use of plastics as these go straight to our oceans.

We also deliver eco-surfing products that are reliable and safe to use to minimize the number of chemicals contaminating our oceans.

This World Tuna Day is the best day to start recalibrating our ways of dealing with tuna extinction problems and other marine issues.

How to Make Your Surfers Diet Sustainable for the Ocean

Here are More Reasons Not to Use Plastic Bags and Bottles

Whale Stranding: Whale Rescue and How You Can Help 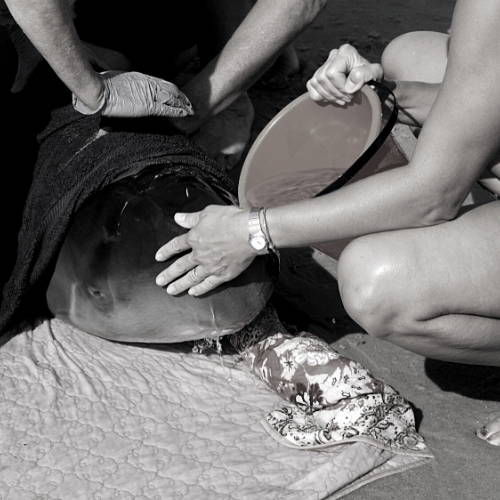